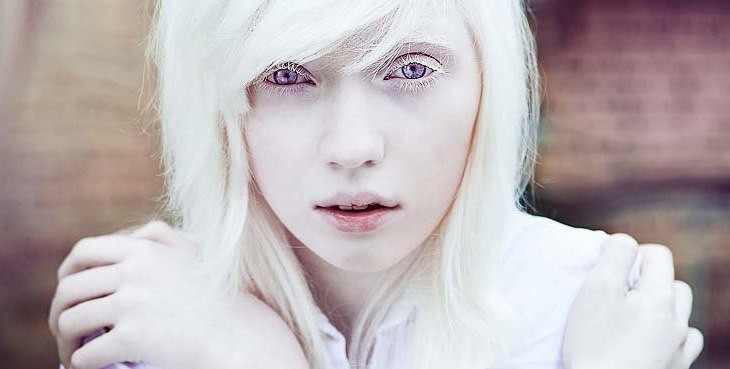 When someone (or something) has a lower-than-usual amount of pigment, it is a condition called albinism. And people as well as animals and plants can have albinism. But what causes albinism and why does it occur?

Melanin, The Root Of All Colour.

Melanin, as we’ve discussed in previous posts, is the chemical that is responsible for adding colour to various parts of our body such as our hair, our skin and our eyes. But when someone (or something) can’t produce normal quantities of melanin, it causes them to have a lack of colour appear. Sometimes everything is affected (hair and skin), and sometimes only the eyes are affected.

Albinism is hereditary which means it’s passed along from generation to generation. And even if someone’s parents weren’t albino, it could very well be that they were (both) carriers of the gene, which is the reason they now have a melanin deficiency. Similarly, if you do not exhibit the traits of someone with albinism, it doesn’t mean you are not a carrier. This is something only genetic testing (or having children) would ever really show.

Protection From The Sun.

We’ve talked about how melanin is what not only gives your skin its colour, but it also protects it from the harmful affects of the sun, specifically UV rays. This is why our skin darkens when we’ve been out in the sun too long and haven’t put on proper sunscreen. So it stands to reason that if your skin lacks in melanin (the colour factor), that your skin cannot protect itself from the sun. Those with albinism must be covered at all times for this reason because it can be dangerous for them to be out in the sun. Even if it’s a cloudy day.

It Can Affect Vision.

If someone has albinism, it could very well be they have blue or brown eyes, but in some extreme cases, they might have red- or even pink-coloured eyes. This is simply because the coloured part of the eye (the iris) has little to no colour, so the blood vessels that are found within the eyeball show through more readily.

As a result, albinism can also affect their vision. Depending on the severity, glasses can help rectify the problem, or even eye surgery. But in more severe cases, the lack of pigment in the iris can cause the person’s eyes to be overly sensitive to light (just like their skin). With skin, the lack of melanin exposes the skin to the UV rays, but in the eyes the lack of colour means the amount of light that goes into the eyes can’t be controlled and the retina (at the back of the eyes) isn’t protected. This makes it difficult for people with albinism to see properly and sometimes sunglasses can make things a little less difficult.

What is impetigo and should I be worried?Articles
The Many Lasers of DermMedica—Find the Treatment for YouArticles